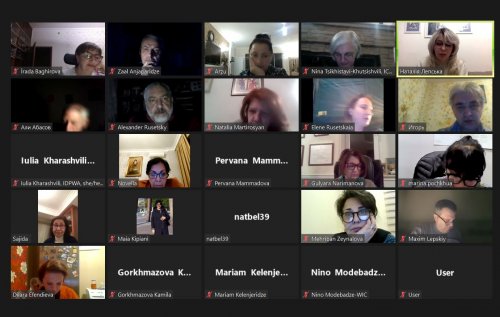 On April 5, 2002, the Azerbaijani section of the Network of Women Mediators of the South Caucasus (NWMSC) held a focus group meeting on the background of the Russian invasion and war in Ukraine. The online meeting, which was a round table, presented the concept of "women and war", but discussed not only the role of women a priori, but also concrete proposals for the effectiveness of women's participation in peace processes.

Proactive women from the South Caucasus and Ukraine, as well as men who are interested in the Peacebuilding potential of women and are ready to share their proposals were invited as participants of the round table.

The participants noted that the world is on the verge of a nuclear collision, when all the world's major actors, well educated in diplomacy and crisis management, could not avoid war and are now finding ways to resolve the conflict with minimal losses.

They discussed what proactive women's and women's organizations can offer to resolve conflicts.

Whether there are new effective ways to prevent and stop war. No matter how the parties to the conflict treat it, any conflict or war ends in a peace agreement. And the sooner it reaches it, the fewer casualties, destruction and destruction. Most participants agree that the main peace actors have failed to prevent armed conflict.

1. Taking into account the devastating events in Ukraine, change our activities, create a movement and go to Ukraine, several participants expressed their consent to go to Ukraine.

2. We should contribute that the meaning and essence of the two main principles "self-determination and territorial integrity" should be clearly defined, as most of the conflicts are caused by the unflattering formulation of these principles.

3. A 16-day campaign to end violence against women is held annually. We can hold a peace action and on behalf of the participants of this meeting we can address UN Women with a proposal to hold a 10-day "Peace Action" around the world.

4. Foreign experts are often invited as mediators who do not understand the problems of the region, but there are local mediators and their potential needs to be used.

5. International law does not work, international organizations do not work as we want. We must give them our suggestions or offer them alternatives.

6. It is important to work with children, because they are building a future that should be without war.

7. For international organizations working in conflict regions, it is necessary to write a work plan from the perspective of women.

8. Currently, women can create an information network in groups and fight false information that is a priority, other issues you can take care of later.

In 2018, The Network of Women Mediators of South Caucasus was established on the initiative of the International Center on Conflict and Negotiation (ICCN) with the support of the Global Partnership for the Prevention of Armed Conflicts (GPPAC).

We plan to continue our efforts to make this important and attractive Network more effective.